"For the past 37 years, I've used ProMark drumsticks."

"For the past 37 years, I've used ProMark drumsticks."

"I use Hickory 707 Simon Phillips Wood Tip drumsticks because they are AWESOME!" 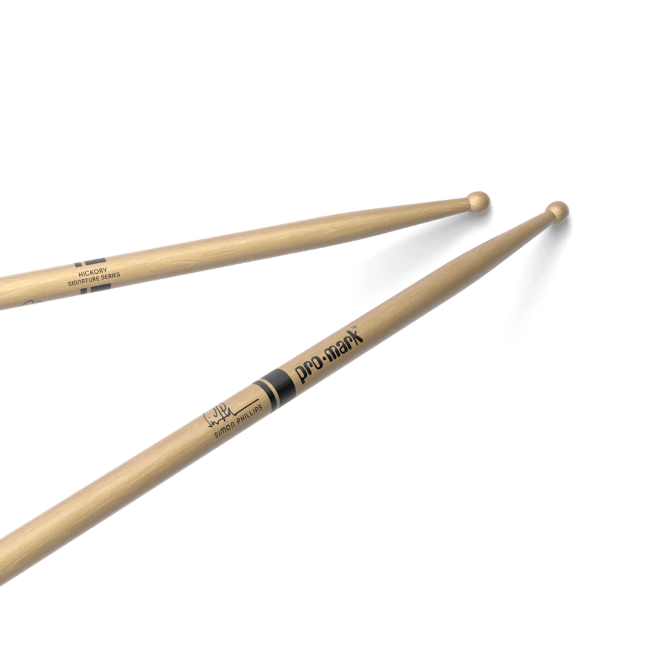 Simon Phillips is by far one of the world's most renowned and respected musicians, whose style not only reflects his technical gift but also his distinct musical sensibility. Whether it is Rock, Fusion, Jazz or World, Simon applies the same precision and intensity to his drumming, which is never lacking in emotion and feel. Simon's professional musical career began at the early age of twelve, performing and recording with his father's, Sid Phillips, Dixieland band until he turned sixteen when he joined the London production of the musical "Jesus Christ Superstar." Simon soon became one of London's most celebrated session drummers.

In his early twenties he was well on his way to having a musical career nothing short of brilliance. To date he has toured and recorded with many bands and artists, including: Mick Jagger, The Who, Jeff Beck, Jack Bruce, Peter Gabriel, Joe Satriani, Tears for Fears, Judas Priest, Roxy Music, Michael Schenker, Nik Kershaw, Al DiMeola, 801, Pete Townshend, Robert Palmer, Stanley Clarke, The Pretenders, Whitesnake and Dave Gilmore... to name but a few. Expanding his career from drumming to composing, Simon recorded his first solo album "Protocol" in 1988, followed by a live album, "Force Majeure," in 1992. During that year he got a call to join Toto on their Kingdom Of Desire tour of the World and this was the start of a 21 year collaboration. He recorded his third solo album, "Symbiosis," in 1995 and "Another Lifetime" in 1997. He formed his own band and toured Europe and Japan.

In 1999 a complete change of style took place and resulted in "Vantage Point," which is a pure, straight ahead jazz album in collaboration with pianist Jeff Babko. Simon is also known as a producer and engineer and collaborated with British composer Mike Oldfield, on albums Crises, Discovery & Islands. Aside from his solo projects, Simon also co-produced Toto's "Tambu" in 1995, followed by "Mindfields" in 1998 and adding engineering duties to co-produce "Through the Looking Glass" in 2002 and "Falling In Between" in 2005. In 2009 he partnered up with longtime associate and friend, Philippe Saisse and together with Pino Palladino formed PSP. A live CD and an EP was produced and tours of Europe and Japan in 2011 & 2012. In 2010 he joined Michael Schenker for a short tour of Japan - the first time playing with Michael since the recording of the Michael Schenker Group in 1980. Also that year he performed with Trilok Gurtu and the NDR Big Band for an amazing project resulting in the "21 Spices" CD - a fusion of Indian, World and Jazz music.

As if not busy enough in 2010 Simon was approached by Japanese virtuoso pianist Hiromi to form "The Trio Project" together with bass legend Anthony Jackson. The trio has recorded four CDs, "Voice," "Move," "Alive" and "Spark." The trio toured throughout the World from 2010 to 2017. 25 years after his first solo recording, Simon released "Protocol II" featuring Andy Timmons (Gtr), Steve Weingart (Keys) and Ernest Tibbs (Bass). The band, under the name of "Protocol II," toured in Europe, the US and Japan.

At the beginning of 2014 Simon felt that, after 21 years, it was time to leave Toto. "Protocol III" was recorded and tours of Europe, Japan and the US followed. A new CD, Protocol IV, was released in October of 2017 featuring a new band - Greg Howe (gtr), Dennis Hamm (keys) and Ernest Tibbs (bass) and followed up by tours in Europe, Japan, China & the US. 2019 will be the 30th anniversary of the Protocol project and a new band featuring Ernest Tibbs on bass, Otmaro Ruiz on keys and two young amazing musicians -- Jacob Scesney on horns and Alexander Sill on Guitar. Tours of Japan, the US and Europe are lined up for later this year. To celebrate this milestone of Simon's career he has just released a 6 CD Protocol Boxed Set.